Once upon a time, there was a piece of firewood that suggested it was meant for different things than warming a house. We set it aside to let it decide what it

wanted to be. It played for a while of different visions of its self: a Sasquatch foot, a goblin’s head, until it finally discovered that a fairy nest was what it wanted to be most of all.

We lugged out our treasure trove of mysterious doodads and set to gluing. We tested places and arrangements and did our best to think like a fairy, until at last our work was done. There are buttons and bottles, feathers and finery, sea glass and steel bolts: a dozen things to keep little hands amused and busy.

The only trouble now is convincing a certain little girl to let me play with it, too. 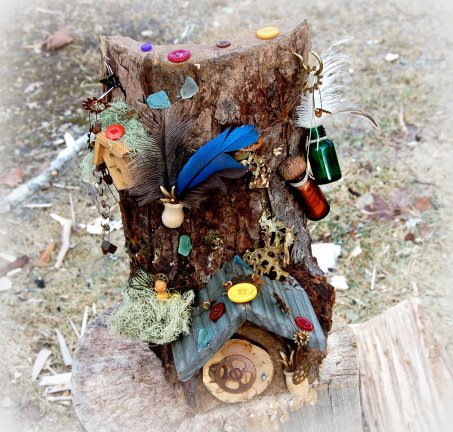 I must acknowledge the creativity of a child has impressed me, for she quickly converted the hanging bottles into a fairy belfry and the clockwork chain into a ladder that reaches the floor from our coffee table, just in case the fairy needs a break from flying, of course. 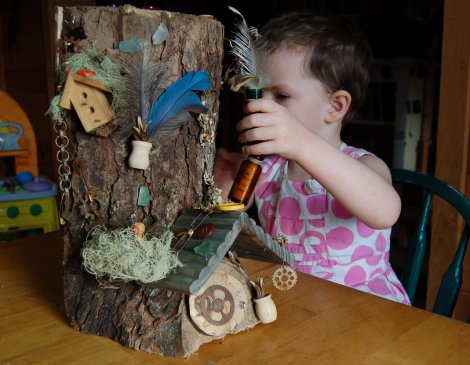 I’ve always been a writer, and I have been finding a lot of creative joy from recording my “little stories”to share.  The things I come across in nature tend to get all mixed up in my imagination and come out as something entirely sense-of-wonderful and fictional.   So I’m going with it, because anything that helps us engage with nature is something we need more of.

I’ve created a unique facebook page to post them, as I do want this venue to remain an expedition into upcycling; after all, this world needs more people to upcycle too.  If you’d like to follow my little stories journey, I’d love to see you there.  The url is https://www.facebook.com/writerJenniferShelby and all are welcome.

But…just one more story before we get back to the business of upcycling. 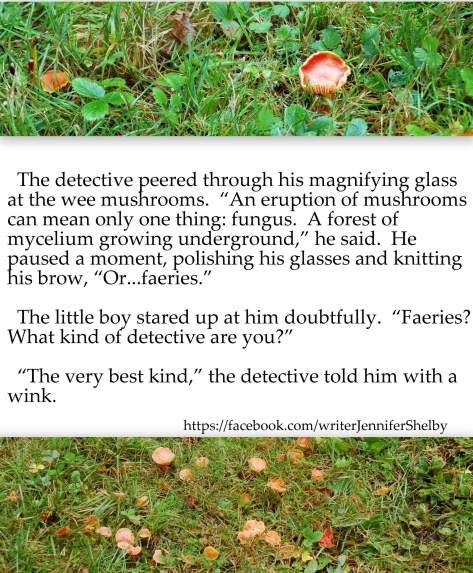 A lovely maple sat at the top of the property, looking out over the forest and the family that lived in the little house nestled into the trees.  The maple braved the blustery Maritime winter and the storms that whipped up the bay and lashed against the seaside mountain where it grew.

It was a strong, heroic sort of tree, but a wee fungus in the grass grew jealous of its lofty heights.  So jealous that it decided to infect the maple, and girdle it about the base until it could no longer feed itself from the earth where it grew.

Slowly, its leaves began to fall, ’til one spring came when it grew no leaves at all, and the family that lived there knew they had to cut the maple down to keep their little one from danger.  Still, the family had looked to the tree with much respect and healthy wonder, so they paid homage to the maple as best they could.

They made this mortal maple a testament to human wonder and the power that nature gives to the imagination.  They made the maple beloved from far and wide by children and youthful hearts with clasped hands and squeals of glee as they rediscovered their long lost stories.   For nothing in nature or imagination is ever truly lost.

Sharing at this Upcycling Party

My handmade soaps were recently requested by a local shop, so I suddenly found myself in need of a display that might catch an eye or two.  Some reclaimed wood and odd pieces of twice-loved denim conspired together to come up with something reminiscent of an old fashioned soap box displayed in the local general store.  My all-natural soaps feel quite at home snuggled inside and ready to see the world.

Pieces of old sweatshirts, a few rags, and a bit of ribbon, touched by the well-worn wand of my fairy godmother, re-imagine themselves into a snuggly pair of arm-warmers.  They surely whisper of fairy tale dresses I dreamt of once upon a time. 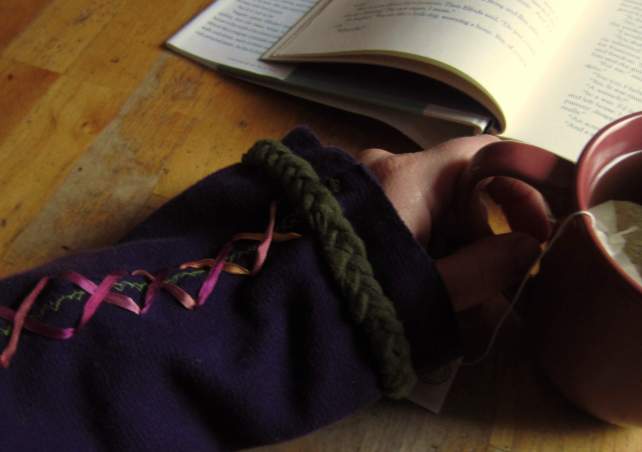 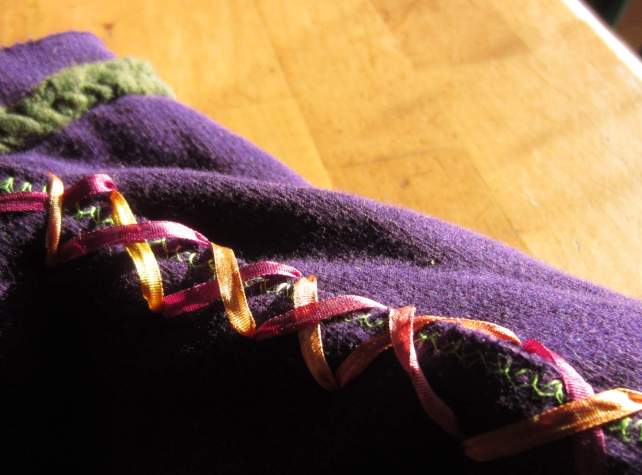 A moth-eaten, unflattering, old wool sweater lay in the back of my closet for far too long, all the while tempting me anew with warm woolly comfort when the days grow chilly and damp.   When the temptation returned these past frosty days I knew it was time to re-imagine the undervalued  jumper into something forever altered that would pay homage to it’s autumnal allurement.

Wool roving was wisped and  needle felted into the moth holes, and a pair of trusty scissors transformed the neglected pullover into a comely cardigan.  Some coordinating wool yarn was found and new borders were crocheted along both the old and new.  A lovely branch provided a pair of buttons and secured this upcycled sweater’s place in the autumn forest. 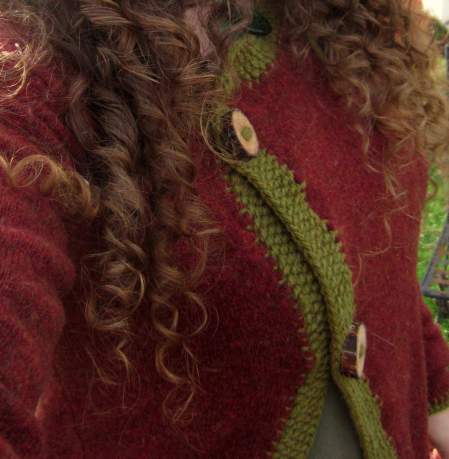 This particular re-imagining owes its inspiration to this beautiful project discovered at this site (click for link).  Linking up with Funky Junk Interiors Upcycle Party.

She’s programmed to protect the garden. 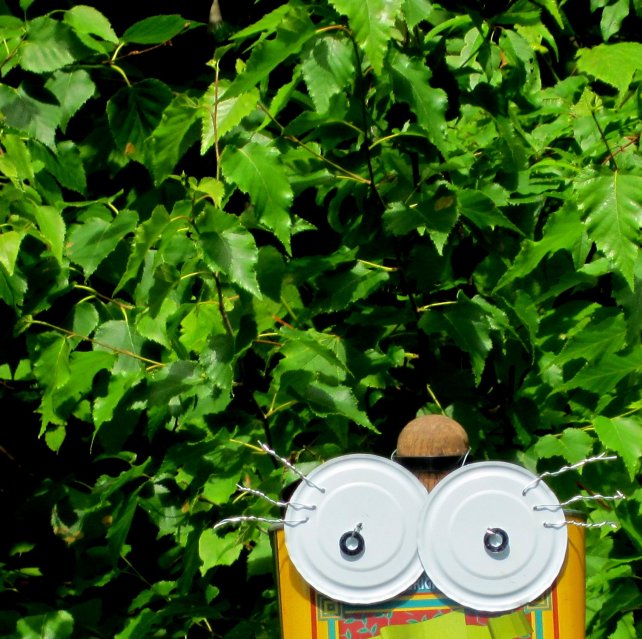 Empty bags of our favourite locally roasted, fair trade, organic coffee have been adding up (and getting unwieldy!).  Upcycling bags with all those planet-friendly qualities just seems natural.  Fortunately, we also enjoy Full Steam Coffee’s logo and decidedly Maritime theme.  The scissors got to work, and the sewing machine (denim needle recommended) stitched away, and sure enough, a funky satchel just begging to go to the farmer’s market was born.

Our trusty roll of duct tape was concerned that the inside bottom of the satchel, the strap, as well as where the strap meets the body of the bag, might need a little reinforcing before carrying heavy loads of organic carrots or books, so it stuck itself there to help hold things together. 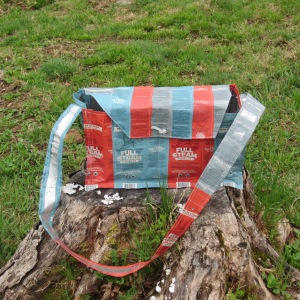 Linking up with the Funky Junk Upcycling party